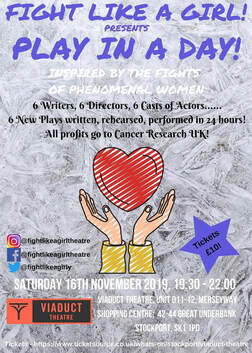 
​Fight Like A Girl! Presents: Play In A Day!
​
Fight Like A Girl! is a project led by Andy Piklington that seeks to use theatre to raise funds for Cancer Research UK. Play in a day 2019 sought to bring together 6 writers, 6 directors and over 20 actors to work on 6 short plays in 24 hours. The writers toiled through the night to come up with 6 scripts and then, myself and 5 other directors had just one day to work with our actors to bring those pieces to life. The event was hosted by Viaduct Theatre, in my hometown of Stockport, on November 16th 2019. The experience was a complete joy from start to finish, and I hope to take part again in some capacity in the future.

A quirky musical about a scientific discovery that made rubber ducks, cars, global communication, and even space travel possible! Based on true events: in a race against his rivals and battling incredible odds, Charles Goodyear turned natural rubber into a useful product that revolutionised industries around the world. But it took everything he had, and his children's lives hung in the balance. Meanwhile, his wife Clarissa faced the age-old struggle of women everywhere in this patriarchal society - the fight to have her voice heard. Balancing cheeky humour and dark storytelling, 'The Black Stuff' is the tale of a bankrupt button-maker who became one of the most important inventors of all time - and the terrible cost of his obsessive ambition.
We performed this show in the summer of 2018 at multiple venues and festivals in the North.
​PRAISE FOR DIRECTORIAL DEBUT: 'THE BLACK STUFF'
"Director Liz Kearney treats the story of Charles Goodyear, if not as an classical tragedy, then certainly as a cautionary tale. After some initially light-hearted scenes at the opening...Goodyear [is played as] as someone so obsessed with his vision as to be ignorant, or careless, of what is happening in the wider world. While Goodyear might not be destroyed by his fatal flaw, he certainly brings down immense suffering on his family. The approach has an authentic feel...Thought-provoking and entertaining."
- Manchester Theatre Awards
David Cunningham | July '18
☆☆☆☆
​ 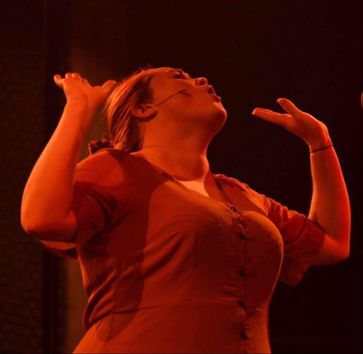 PERFORMING
I am a proud amateur-turned-professional Musical Theatre Actress, specialising in comedic roles that showcase my Mezzo-Alto voice.

“Impressively, there’s enough room for other size-able egos to get their moment in their spotlight. Liz Kearney makes for an aptly awkward and bloody-minded Theresa May, but she is even more scarily at ease with playing Michael Gove, amplifying him into a caricature I hadn’t even realised was there for the mining...Kearney’s highlight comes during the gospel-heavy, hilariously evangelical number “BeLeave” (kitted out with silk blue robes), in which the fervently vague exhortations to “take back control” are all too reminiscent of the twenty-third of June 2016.”
- Culturised Magazine, Lexy Hudson | June '17  ☆☆☆☆☆ 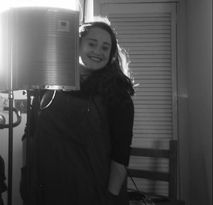 ​Over the past few years I have been increasing my forays into recording my singing voice.
I have recorded covers of the following artists:
Adele, Nina Simone, Nancy Sinatra & Aretha Franklin,
as well as lending my voice to soundtracks of professional shows
​and workshops I have participated in. ​
Site powered by Weebly. Managed by Easy Internet Solutions LTD